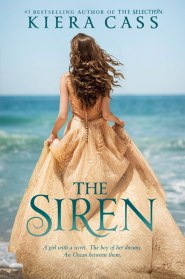 The Siren by Kiera Cass

A girl with a secret.
The boy of her dreams.
An Ocean between them.

Years ago, Kahlen was rescued from drowning by the Ocean. To repay her debt, she has served as a Siren ever since, using her voice to lure countless strangers to their deaths. Though a single word from Kahlen can kill, she can’t resist spending her days on land, watching ordinary people and longing for the day when she will be able to speak and laugh and live freely among them again.

Kahlen is resigned to finishing her sentence in solitude…until she meets Akinli. Handsome, caring, and kind, Akinli is everything Kahlen ever dreamed of.

Falling in love with a human breaks the Ocean’s rules. But for the first time in a lifetime of following the rules, Kahlen is determined to follow her heart.

So I actually did read the original a while ago, back when it looked like this:

And it was greatly improved this time around. Aklini and Khalen are just really cute and Kiera is so amazing with coming up with these unique names for all of her books.

One thing I enjoyed more in the new version was how Khalen met Aklini in the library, though their date seemed a little forced…

I just empathized with Khalen so much and all of the girls, that definitely improved from the old version to the new one.

To be completely honest, though the cover change has been great, the new one looks waaaay too much like the Selection covers, and it shouldn’t since it has nothing to do with them.

I also was not a fan of the ending of the newer version because it seems like someone told Kiera that her old ending was too bittersweet and said that she needn’t a happier ending so she changed it to make it happier.

I was just so not having the whole they both have this deadly disease thing!!!

Overall I found that most of the changes were for the better in this newer version, and I would have given it a 3.5 stars before, and now I’m giving it a 3.7.

A lovely book that is so unique and ‘the little mermaid’ esque and I liked it!

Have you read this book? Did you read the old version before the new one? What are your thoughts?! Let’s chat!

3 thoughts on “The Siren by Kiera Cass Book Review/Discussion”