Hello! Welcome! In case you don’t know, Shadowhunters is the tv adaptation of Cassandra Clare’s hit series the Mortal Instruments. There was originally a movie version, called The Mortal Instruments: City of Bones, but the series failed to make a sequel movie which I was quite disappointed about.

I watched the movie and thought that it was okay, but after watching season 1 of the tv show, titled Shadowhunters, I thought the movie was excellent as the shadowhunters tv show sucked big time in season 1.

The tv show made the movie look faithful af.

The show was renewed for a second season and a new writer was hired and I have to say that after finishing season 2, the show has improved! Hallelujah!

So here are some of my thoughts! And it’s okay if you disagree! 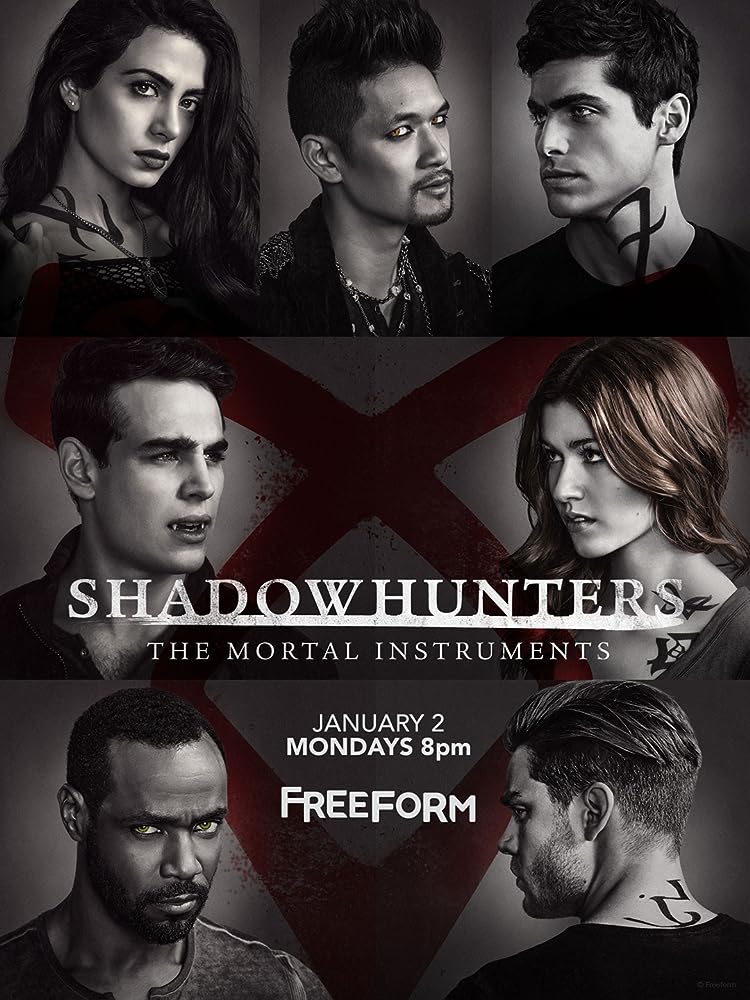 I love how in the poster Clary and Simon are looking straight at the audience and everyone else is looking to the side. Like what is Jace doing with his facial expression? I like the Season 2 poster a lot more! It’s the one on the right. Except what’s with Jace’s turned head when we can see everyone else’s face?

The acting has gotten significantly better, and I actually felt some emotions while watching! Some of the plot lines still felt strange to me and didn’t make sense but overall the writers are somewhat following the book plot.

If I watched this show without reading the books first I would say that it’s an okay show, but knowing the amazing books and what happens in them, the show still continues to disappoint me because the characters don’t match the ones I already know in my head.

There are major defenders of the show who bash on us book lovers and say that it’s an adaption, we can’t expect it to be exactly like the books. Pretty Little Liars is nothing like the books and is a great tv show. My counter to that is that the Pretty Little Liars books were not relatively known before the show. There wasn’t that big fanbase that The Mortal Instruments books had before the Shadowhunters show.

And it also has to do with the actors, if I feel like laughing at some of the lines and facial expressions in a solemn scene, then it’s not good. I think I can honestly say that if the actors were more like the book, and there was a totally different plotline I would still like the show. It’s not about the books at this point, I just want a decent show.

Now maybe I am extremely biased as a staunch supporters of Cassandra Clare’s books, but why mess with an already perfect book series that has amazing plot lines that could be followed in a tv show with an amazing result?

I just don’t understand why the show couldn’t have followed the books, it would have made a much better show. That being said I do think that season 2 has gotten a lot better and there have been some moments where I was actually like ‘Yes! That’s my Jace!’

The season 2 plot has also been following book 2 and 3 of the Mortal Instruments series a bit more. I don’t think this show will ever match some of my other favorite book to tv series favorites like Outlander, but I think I’ve come to tolerate the show.

Actually, you know what? I am looking forward to season 3 a little bit, so that just shows that I don’t dislike the show that much, after all, I watch it every week when it’s on. I’m excited to meet Sebastian in the next season!

Simon! I love him and all of this lines! Alberto Rosende is doing a great job! I also like some of the Jace moments. When Simon and Jace are together, like at the bar scene when Jace is giving Simon girl tips, the snarky Jace comes out a little and I loved it!

I also like the guy who plays Valentine, Alan van Spring. The other characters I’m coming to tolerate I think.

So fav character? Simon for sure

Least favorite? Hmm, though I love Magnus as a characters, I feel like Harry Shum is making him really dramatic and he talks very slow and grave all the time? I don’t dislike any of the characters actually, I do love my Malec and also gasp! What’s with the Rizzy going on?? Where’s my Sizzy??

Anyhoo, that’s all from me today…

What do you think?! Do you still watch shadowhunters? Do you love it, hate it? Let me know in the comments below!

I thought I’d make a list of some of the TV shows I watch, past and present!

I don’t really watch that much TV, duh, I’d rather read books, and I’m honestly way too busy for actual television, but I do use the freeform app to watch some shows and then when I have downtime sometimes I just watch whatever is on, usually crime shows.

I don’t have netflix, my mom won’t allow it and thinks it’s a waste of time, so I can’t watch too many of the shows I hear great things about.

In Journalism last year we watched a lot of How to Get Away with Murder which was really good, but I couldn’t continue since obviously I don’t have Netflix, and then also the Office is really good from what I’ve seen at school. (After the AP exams last year there was a bit of downtime in class where we watched the Office).

But anyway I am currently obsessed with Gilmore Girls and have finally gotten the first season from the library and want to binge on all 7 seasons before the revival at the end of November. Do you think I can watch all of it before then? I hope so.

I love this show so much and Rory is literally me around guys, and we’re the same age in the first season actually. My best friend loves this show too and she’s like welcome to the fandom when I gushed to her about the show haha.

Despite how bad the Shadowhunters tv show is, I still will keep watching when the second season comes out because MALEC!!!!

I’m used to LOVE Pretty Little Liars but now it’s getting slightly annoying with the second season and the twists that just keep on coming out of nowhere.

I also watch Stitchers on the freeform app just cause, and I don’t know if there will be another season but if there is I’ll watch it most likely. It’s definitely not the greatest show in the world but I really ship the two main characters so there’s that.

Whenever I just randomly watch TV, which is practically never, I usually watch CSI Miami, Law and Order SVU re-runs, Rizzoli and Isles, Bones and the Mentalist.

Also this summer I watched a bit of Baywatch which I liked cause I’m a lifeguard and then also Keeping Up With the Kardashians which just reminded me again why I hate reality TV.

I used to be really obsessed with the show H2O: Just Add Water and obviously all things Disney and Nickelodeon like Hannah Montana and Wizards of Waverly Place.

And then of course, I’m an absolute fangirl when it comes to anything Outlander but unfortunately I don’t have Starz so I have to wait for season 2 to come out on DVD in order to watch it 😦

I absolutely loved the book and this is one of my favorite book to movie/tv adapations ever!!! Claire and Jamie are my OTP.

What tv shows do you watch? Wanna fangirl with me about any of the ones above?!

I’m currently doing a giveaway right now for my birthday on Friday, the rafflecopter link here:

Also if you want to see the blog post that I did itself, you can click here: 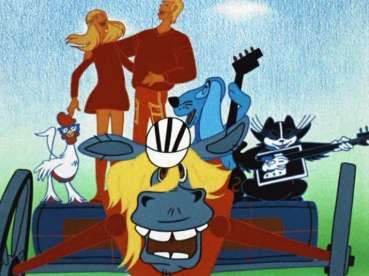