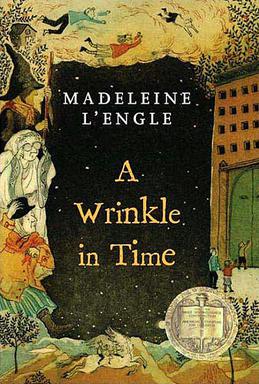 A Wrinkle in Time by Madeleine L ‘Engle

It was a dark and stormy night; Meg Murry, her small brother Charles Wallace, and her mother had come down to the kitchen for a midnight snack when they were upset by the arrival of a most disturbing stranger.

“Wild nights are my glory,” the unearthly stranger told them. “I just got caught in a downdraft and blown off course. Let me be on my way. Speaking of way, by the way, there is such a thing as a tesseract”.

Meg’s father had been experimenting with this fifth dimension of time travel when he mysteriously disappeared. Now the time has come for Meg, her friend Calvin, and Charles Wallace to rescue him. But can they outwit the forces of evil they will encounter on their heart-stopping journey through space?

I found this book in my house after my brother borrowed it from the library but never read it and was going to return it until I pounced and claimed it for myself. I had it sitting on my desk for a month before I finally got around to reading it! I honestly renewed it from the library 3 times. That’s okay though because I’ve finally read it!

I didn’t know anything about this book before going into it and the sci-fi elements really surprised me. I shouldn’t have been surprised though because hello the title is a dead giveaway but whatever it’s middle grade so it could have been about anything really.

Charles Wallace is my favorite! What a sweet intelligent boy! I was so upset when was being manipulated by IT.  Also Calvin! Do I sense a Meg and Calvin relationship in the future??

I’ve heard there’s a movie being made of this book, or maybe there already is one? I don’t know, it’s late at night and I don’t feel like doing extra research. Wait now I’m curious, one sec. AHA! There is a movie and it’s coming out in 2018 and I’m totally going to see it!

ALSO! Speaking of movies THE HATE YOU GIVE is being turned into a movie!! Omg see what I just did there, I capitalized the title. You know why? Because I’m a reviewer over at teenreads.com and I’m slowly being sucked into their formatting style. I will probably be adopting it completely over the next few months. Teen reads doesn’t stop me from being a fangirl and totally informal on my personal blog right here though!

Okay moving on, Aunt Beast was also so cute and so motherly I was so touched because I thought they were honestly going to eat Meg, Calvin and father. Also I thought I would like father a bit more but I didn’t which made me sad.

Sci-fi space stuff and evil stuff and three witch things that can time travel! Can you tell senior year is getting to me? The college pressure is real ya’ll.

Thankfully school hasn’t put a damper on my reading just yet, I’m still reading a lot, but not blogging -_-

Anyhoo, have you read this book?! What did you think?! Let’s chat! Also no I am not over hyped on coffee right now, it’s the Greenday blasting in my ears that’s hyping me up, I swear. And Panic too.

P.S. It was my BIRTHDAY yesterday!! I am officially 17 years of age! Wooh!! Any fellow Virgos out there??!!

2 thoughts on “A Wrinkle in Time Book Review!”