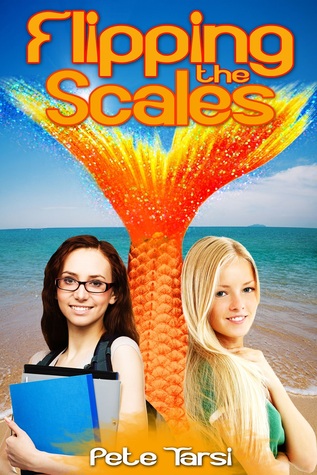 Flipping the Scales by Pete Tarsi

Meredith and Marina’s lives have been flipped upside down.

When the translucent skirt that straight-A-student Meredith finds hidden on the beach gets wet, it transforms her legs into a mermaid tail. Despite the evidence in front of her, she insists that becoming a mythical creature isn’t scientifically possible.

Marina is allowed to experience one day per moon cycle among the humans. After hiding her tail on the beach that morning, she takes her first timid steps on land. When she returns at sunset to find it missing, she is left stranded and alone.

For the first time in her life, Meredith doesn’t have all the answers. As she searches for a way to return to normal before the next full moon, she makes waves among the school of mermaids. Meanwhile, Marina uncovers information about her past, and for the first time in her life, she must stand on her own two feet and take the lead on her own adventure.

As Meredith senses her human side slipping away, a forbidden way to change back entices her. But it comes with a consequence: Marina wouldn’t be able to return to the ocean.

Ahh I absolutely LOVE mermaid stories! I used to be obsessed with that show, H20: Just Add Water and when I was younger it was so much fun to pretend to be a mermaid whenever I went to the beach with my family.

This book was so cute too and was basically any mermaid lovers’ fantasy.

I found myself really relating to Meredith because in terms of school and doing all of these activities for college, that’s me basically. The thing is, if I didn’t need to play sports and participate in clubs for college, I think I would still do them for fun, not because I need to, so that’s where Meredith and I might differ.

It was also cool to see that my name Calliope was a character in the book. Every time the book mentioned Calliope, I was like hey, that’s me!

It confused me that Loreli didn’t find Meredith a seashell top before bringing her to the school, because that’s a large hint. (Also I’ve started watching Gilmore Girls, and Loreli is a main character in that so I was like yesss).

I liked the relationships between all of the characters though the insta love thing is a little over-used for my personally. Also the way in which the teenagers spoke was very different and stuck out to me because that’s not how myself and my friends talk to each other at all. I mean Marina and Loreli talk funny cause they’re mermaids and all but still.

Also the way Jill considered taking away Marina’s tail for good if Meredith changed at the new/no moon shocked me because duh that’s rude of her to consider making a decision about a tail that doesn’t belong tot neither her nor Meredith.

A delightful mermaid tale, or should I say tail (*the cringe is real on that one sorry). Anyway, a lovely story with interesting characters that teens can relate to!

Thanks for reading! Who else has ever had mermaid fantasies before?!

Also if you want to see the blog post that I did itself, you can click here: