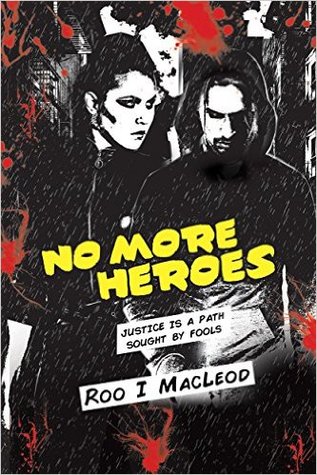 No More Heroes by Roo I. MacLeod

On the crime ridden streets of Old London Town the law has been subcontracted and justice awarded to the highest bidder. But from the dark depths of despair and chaos, a hero is born.

A murder on the crime-ridden streets of Ostere isn’t headline news
A vagrant running from conscription is common place
But this vagrant knew the deceased and was witnessed fighting with the deceased
So now the police want a word
As do the killers
Ben Jackman, vagrant by day, hunter of road kill by night, isn’t the man to take the fall
Proving his innocence is obvious
Finding the killer is crucial
But Ben needs a gun, a big gun with lots of bullets, because the seedy streets of Ostere have a new breed of criminal and they aren’t looking to take prisoners

This was such an interesting book with so many diverse and unique characters.

That being said, it took me about 100 pages to really get into the book, the first half kind of dragging on for me.

I really loved the character Harry and how he made Ben act differently as well as Tilly when she smashed that brick over the intruder in her house.

There was a lot of murder and blood and guns, but this is a New Adult book.

It’s set in a dystopian world where the main character Ben gets stuck with a bag from an old high school friend and then suddenly every person in the town is after Ben and the bag.

While reading it seemed to me that Ben tried to mind his own business and was a good person, but just had a lot of bad luck with the wrong sort of people and the law.

I thought that the book did drag on a little in the beginning right after the bag was lost and everything went downhill for Marvin and then Ben. Other than that the ending was very fast paced and truly had me worried for Harry’s life and Tilly’s wrath.

This is the first in a four book series, and you can find more about the book and the author here:

Highly entertaining and a twist and turning plot line with very unique characters. Slightly slow in the beginning but it picks up more towards the end.

Have you read this book? Would you like to?